"I began learning the Alexander Technique because I have RSI, which affects my whole body. I was in constant pain and everything I did seemed to make it worse.

Alexander Technique has shown me a new and much more relaxed way to use my body. Rather than being crushed by my physical problems, where I felt my body was rebelling against me, through Alexander Technique I have been able to make massive improvements in what I can do and minimise the symptoms I have. It makes me feel lighter and walk taller. Not only have I got my body back again but now I have a lot more idea how to avoid injuring myself again."

"I had back problems off and on for approximately 30 years. During that time I was unable to exercise or run and suffered lower back pain for most of the time, especially after sitting down or standing for too long.
I had been managing the pain in my back for about 15 years through various chiropractors and physiotherapists but I was becoming dependant upon very regular ongoing treatments and wanted to take control of the problem and remove the reliance on consistent treatments.
I have had Alexander lessons from Sally for approximately a year and my back problems are now a thing of the past. I have finished my course of lessons and am now in control of my posture and how I use my body in a way that does not cause me pain.
I can now run and exercise and do anything I want to really.This is life changing and I am very grateful to Sally for helping me. I have no hesitation in recommending Sally and the Alexander Technique."

"Dear Sally, I don't know if you remember me I only had two lessons with you. I was terrified of putting my face underwater and you helped me overcome that almost straight away! I went travelling for 8 months and I have recently been SNORKELLING AND SWIMMING OFF A BOAT IN DEEP WATER WITH 15ft MANTA RAYS!! Being underwater and watching these graceful creatures gliding towards me was such a wonderful experience and one I will never forget. This would not have been possible without your coaching and I want to say a massive THANK YOU!!"

"As a musician my work involves playing various keyboard instruments, among them the piano and organ.
I have never been in acute pain, but nevertheless I often seem to feel uncomfortable after periods of practicing, especially around the neck. Not only this but I had a stoop which seems to have plagued me since my childhood. Sally's skilled use of gentle manipulation, her clear directions and advice have had a staggering effect on the 're-education' of my posture and body awareness. As well as straightening out my stoop, my music-making has also benefited, sometimes in quite obvious ways. My organ playing, for example, is less prone to bouts of clumsiness since I am learning to balance all my weight through the sitting bones rather than collapsing forward with weight going into the keyboards. 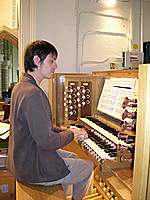 The initial part of each lesson is spent lying down during which the teacher works 'hands-on' to enable the entire body to relax and align itself. This produces a starting point in which the student is sensitised and can listen evermore closely to the myriad of different muscles and areas where strain and 'misuse'occur. The effectiveness of this manipulative treatment alone is worth the money, but the genius of the Technique is in the way the teacher is able to assist the student in reprogramming all the harmful habitual 'wrong' actions which are responsible for amassing the tensions on a daily basis.
Once embarked on this path I realsed it would probably take a long course of study to reform all these ingrained habits but I do feel that with Sally as my teacher I will eventually succeed."

"My experience of Alexander Technique has unquestionably been postive and life-enhancing. The actual Technique is the obvious reason for my brilliant outcome, but for me it was Sally herself who enabled this. She has the serenity to teach with absolute patience and warmth thus giving her pupils confidence and motivation.
Although I had thought about going for lessons for many years, I didn't make the decision until I had met Sally at a series of group sessions which were an introduction to AT. I was a little self conscious, especially as it seemed to me that I was a challenging pupil! I had round shoulders, headaches and suffered from low back pain quite often.

I had lessons every week for many months and was reluctant to sever the ties with Sally, but I find that all the benefits have not disappeared even though my lessons stopped a year ago.
My back is much stronger and straighter, and my headaches are very rare. If I do too much gardening, for instance, and have discomfort, my back recovers in a day.
The benefits at AT are so great that I am trying to persuade my family and friends to have lessons, even for a few weeks.
Cost and commitment are two reasons people give for not trying AT. I would say life-enhancing benefits are well worth the cost, and the commitment is easy once you start."

"The remarkable feature of the Alexander Technique is the combination of Zen-like simplicity and undeniable effectiveness. Great working with you this year Sally."

"I have been using the Alexander Technique for six months, following a car accident which took place a year and a half ago. The accident left me with severe whiplash and a lot of pain down the right-hand side of my body. I had been visiting chiropractors and taking a lot of painkillers. I hadn’t even heard of the Alexander Technique until it was recommended to me by a spinal surgeon. I was very cynical to begin with and thought it was just some new age treatment that wouldn’t work. However after 10 months with a chiropractor and still taking pain killers I decided I would have to be more open minded. When I started the Technique the whole of my right side had seized up and was numb. At the same time, I was crunching up my body to counteract the pain. After two lessons , I was pleasantly surprised by the effects of the lessons. The most important thing you can learn is to manage the pain yourself, which is simple once you have learnt the techniques. I would recommend the Technique for anyone with any form of joint pain. The Alexander Technique has speeded up my recovery immensely and I no longer feel so desperate to rush for the painkillers."

"Discovering the Alexander Technique has been simply wonderful and precious for me. I leave after the lesson feeling like a new more levelled, calmer and happier person. I practice the things you have taught me daily and am now starting to see the benefits. Rome wasn't built in a day as they say and I know that changing old habits can take a long time, but I can safely say that with Alexander Technique my body awareness has greatly improved and helps me in all my daily activities. I'm much more aware of my posture and that has helped me carry out tasks with much less effort.
Since I have been learning the Technique back problems are virtually non existent. The effects of this improved way of being seep into all aspects of my daily life and I have noticed much more calmness and being more centered.
Anyone wishing to experience the Alexander Technique with Sally will not be disappointed."

"I want to say how much the Alexander Technique has helped me sort out the problems I have had with my voice.
I had trained for many years as a classical singer and thought my technique was sound, however, once the problems with my voice started I was very distressed and didn't know if I would ever be able to sing again. Thank goodness the consultant at the QMC recommended the Alexander Technique. It has helped enormously as I now understand how the body works in relation to my singing. I am learning how to relax when singing, rather than my habit of tensing up etc.
I came for Alexander Technique because I had a specific voice problem, not only has the Technique helped with this but also with other things such as posture etc. I think everyone should have AT lessons because I think that everyone will benefit from it, even if they haven't got any specific issues.
I highly recommend you as a teacher as I think you have gone out of your way to research my specific issues related to the singing and tailored the lessons to meet my specific needs."

"I was a student of yours in London and want to thank you for the wonderful lessons that really do contribute to my very fond memories of London. I had a car accident in 1997 and sustained a lower back injury. If I did not have the A.T. background my recovery would have been much harder. I also had a baby 6 months ago and I dread to think what that would be like without having learnt A.T."

"I have had regular lessons with Sally Rughani for a number of years and have found the Alexander Technique and the way Sally teaches it to be very helpful for both body and mind. The gentle touch and correction of posture and movement has taught me over time to recognise when I am sitting, standing and moving well. The feeling is one of lightness and a sense of poise and strength. By becoming more aware of my body I have found I can also affect how I feel and it gives me greater confidence."

"Due to a prolonged stressful situation over several years I was aware that my shoulders and neck were very painful and my headaches were getting worse. At one point I was taking pain killers daily for several weeks with no effect.
By chance I found some information on Alexander Technique and arranged to meet Sally. Within several weeks I noticed that my headaches were not so frequent and over the continuing months was able to stop the analgesia. I have also found that muscular tension and fatigue has disappeared from many parts of my body. I also move more easily and with less effort. The Alexander Technique and Sally have been invaluable in the improvement of my overall health."